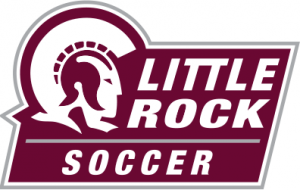 Little Rock (LR) soccer lost 5-1 to the Arkansas Razorbacks on Friday in the first round of the NCAA Women’s Soccer Tournament. The loss ended the most successful season in program history, with the team finishing 13-5-4 under first-year head coach Mark Foster.

The game, played in Fayetteville, proved a struggle for LR from the outset. Only three minutes in, Razorback Taylor Malham scored off a deflection. Eight minutes later, Kayla McKeon added another goal, putting Arkansas up 2-0 within the first ten minutes.

Over the next 30 minutes, Arkansas increased their lead to 5-0, with goals from Tori Cannata, Stefani Doyle, and Tyler Runnels.

With the game effectively out of reach, LR senior defender Liesa Seifert scored a goal in the 61st minute to make the score 5-1.

Despite the loss, LR’s season proved historic. The team finished 7-2 at home and 5-3-2 on the road. Further, LR tallied an eight-game unbeaten streak and won the Sun Belt Conference Tournament, with wins over Arkansas State, Georgia State, and Texas State in the final.

Looking ahead, Head Coach Mark Foster faces a difficult task going into his second year as leader of the Trojans. LR will have to replace 10 seniors from this season’s team, most notably Jaclyn Purvine and Arola Aparicio Gili.