Do you know what caused a crucial turning point for segregation in the state of Arkansas?  Imagine it is the year 1954, the U.S. Supreme Court ruled in Brown vs. Board of Education that segregated schools were unconstitutional. Now, three years after the ruling, the Little Rock Nine are placed into an all-white high school. This moment in time marked history for our state.

The National Guard was even called to ensure the integration of Central High School. They were deployed after Dwight D. Eisenhower gave a subtle warning to Governor Orval Faubus not to defy the Supreme Courts ruling after Faubus threatened using the Arkansas National Guard to block integration.

These monuments and their hidden figures allow us to reflect on the past. We do not usually think about city history when we think of active change. We do not think about the fact that there used to be labels on water fountains and separate sections on our bus. Most of all, we do not think of the hidden figures in our very community that helped inspire social change. Today, there are activists stepping back up to the plate after resting years on the bench.

Mrs. Misty Cartright, an 85-year-old African American woman, is one of them.

“Segregation isn’t about color, but about how we treat people,” Cartright said.

Cartwright is a prior social worker who has enacted change in many lives. In the 1960s she worked through many cases to get where she is today. “Seventy years I have been fighting this fight,” Cartwright said with a proud smile. That fight presses on through years of social ignorance, and this last year we were faced with the hard truths. The color of our skin has always defined our ethnicity, but as we have grown there have been prejudices set out on both sides. In 2020, we had an opportunity to visit our views on racism and our morals. The emergence of Black Lives Matter was a profound moment in our year of troubles, and people everywhere like Misty and Tracey Dae continue to pursue social change.

“Black, white, yellow, brown or whatever color you are; your treatment should depend on your character,” said Dae, a retired teacher that continues to work with social activist groups. “Sometimes that means being the bigger man, and other times you should know when to admit your wrongs.”

Black Lives Matter was created to fight for freedom, liberation and justice. There were multiple peaceful protests in 2020 that hoped to develop social change. Although the peaceful protests received criticism, there was a lot of realization through these events.  There were multiple reform changes and a drastic development on dash cams and body cams for the police force.

Our country continued to push through these challenges during the race between Donald J. Trump and Joe Biden for President. Tensions ran high, but whenever inauguration came around- history was made. When President Joe Biden was elected as the 46th United States President, Kamala Harris became the Vice President and made history as she is the first woman in a presidential office of both South American and African American ancestry.

These moments in history show us that social activism can bring about not only subtle change, but lasting effects. Our country is constantly evolving. We may seem to be taking steps back right now, but history is bound to throw us forward into the future, espeically with the amazing work of activists like Cartwright and Dae.

Take the time this Black History Month to learn the history of your city! Find the hidden figures everywhere around you. Take the time to watch history being made. How will you enact social change?

Throughout the month of February, we celebrate many people that have paved the way for social change in our nation and our community. African American History Month or Black History Month gives us another opportunity to learn about leaders of our past and present that are creating a roadmap for us to follow.

Having the ability to discuss issues and learn about facing the difficult challenges allow us all to grow, and that is what the attendees of the virtual event, “The Making of a Leader: An Open Discussion with Prominent Black Community Leaders”, had a chance to do the evening of Wednesday, February 24.

The panel hosted by University of Arkansas Student Government Association included prestigious members of our community and our nation that have come from the African American community. The student government leaders; Ty Collins, and Landon DeCay arranged the enlightening discussion with the assistant director of the Multicultural Center, Lauren Wilson.

We thank their continued efforts to arrange these amazing opportunities. They chose these panel candidates to not only support Black History Month, but to ignite a spark in any student having trouble overcoming challenges dictated by social norms.

Many of the panelists overcame their own hardships on the journey to where they are now. Among them was Mayor Frank Scott Jr., the first black elected chief executive and 73rd mayor of Little Rock. State Senator Joyce Elliot, a public-school teacher and former Democratic Candidate for U.S. Congress. The first African American CEO in the state of Arkansas, now retired, Jannie Cotton. Mrs. Cotton is also a mental health policy leader and advocate along with a Democratic Candidate for State Representative.

These inspirational leaders spoke about their backgrounds, their challenges, and their road to success. A particular moment that stood out, was whenever they all three spoke about the journey they had coming out of segregation. A mountain had to be climbed in the state of Arkansas in order to succeed in the endeavor for equality.

Sen. Elliot and Mrs. Cotton both remember the issues they encountered growing up in a segregated community. The challenges they faced to get an equal education, equal job opportunities, and an equal voice led them into supporting social activism. Fighting against social normalities is a difficult task, but it was one that many rose to accomplish. As a result of the growing numbers, segregation began to disperse in multiple states. People that were once hiding were stepping out and making their voices heard.

Sen. Elliot went into great detail about how she gathered her inspiration to go into politics from President John F. Kennedy, a man whose voice helped represent the black communities all over the nation. “I saw this man, that was able to bring those hunched over and struggling- I saw them become an oak, not a willow. I knew that is what I wanted to do.” The former President Kennedy allowed hope to rise in the African American population, along with other minority groups, and in return people started showing their potential.

The African American community started to realize that they could be anything they set their minds to, and they should have the same chance as any other qualified member of society. Sen. Elliot has become an oak herself in todays’ society, planting herself strong and speaking out. She has been a true advocate for social change, and her work continues to inspire others to use their voice; no matter their color, race, or ethnicity.

“Being able to open or knock down doors that were previously closed is the only way to break those barriers dividing us,” Sen. Elliot stated.

Breaking Barriers became such an important statement among these three role models. Mayor Scott spoke about how important it is that we understand intergenerational differences and discussed the importance of it with both Sen. Elliot and Mrs. Cotton. “Previous generations fought very hard so my generation would be invited to the table.” It is important to understand the past, just as well as the future.

He continued on, stating that it was our responsibility, as the generation that can make change, to pursue those risks. “It is our responsibility to make sure you’re always on the right side of history,” his declaration is one of great importance to many communities and ethnicities in the community. You need to understand where you need to be, and work to get there in a proper manner.

To do good and do good rightfully are equally important. Mayor Scott Jr. presented a trifecta that we should all use in order to improve our society moving forward. The ability to not only make change, but to make a better country and community relies on the people.

“We can forward black history, other history, by being intentional, being inclusive, and having integrity. These are all monumental factors in making change,” said Mayor Scott Jr..

Change begins within each of us and then we are able to spread awareness to others. By being aware of our own actions, we can create a better future. “You never want to be just the first,” Mrs. Cotton described her view on effective social change, “Leave instructions. You might have paved that path but leave instructions for others to use. Even if they choose not to follow them, it is there if anyone needs it.” Paving the way for social reform is a task in itself. A burden, but one worth pursuing. Being a social advocate means to create change, to make ideas actualities, and do that work that needs to be done.

Black History month is an important time to reflect on yourself, no matter your ethnicity. Is your voice being heard? What changes can you make? Are you putting in the work? There are so many inspirational role models that you can learn from to help you pursue your own goals. You have to have a first, before you can have another.

Be the first. Break those barriers and leave your mark on history. Let your voice be heart, become the oak, do what is right, and put in the work to create a better future. Do all this in hope the next person on the journey will know which path to take and will do good along the way.

Numerous iconic African-American women have touched millions of hearts via their words and presence.  One of those amazing women is the inspirational writer Dr. Maya Angelou. At age 40, she published her book “I Know Why the Caged Bird Sings,” which became the first non-fiction best-seller by an African-American woman.

She was born on April 04, 1928, in St. Louis, Missouri however; Dr. Angelou spent her early childhood in the rural town of Stamps, Arkansas. Dr. Angelou endured the bitterness and stench of racism in the South.  Her innocence was stolen from her when she was seven years old. The retaliation she witnessed by her uncles toward her rapist left a scar in her life. She refused to speak for five years and found refuge through poetry.

A voice that once lay dormant rose to a frequency that broke down barriers in the Civil Rights movement.  She loved the arts and learned to dance and sing on a professional level. When I was in high school, I remember listening to her cite her poem “Still I Rise.” Through time and space, those words have remained an inspiration to rise out of any unpleasant situation.

In January of 2021, Barbie Mattel released a new barbie doll in the image of Dr. Maya Angelou, which sold out online within the first five days. Moreover, the “Maya Angelou Doll” is part of the toymaker’s “Inspiring Women Series” collection. Dr. Angelou once said that, “You are the sum total of everything you’ve ever seen, heard, eaten, smelled, been told, forgotten – it’s all there. Everything influences each of us, and because of that I try to make sure that my experiences are positive.” Despite her passing in 2014, her essence continues to live on. Rest in peace, Dr. Maya Angelou.

If you would like to purchase the “Maya Angelou Doll” from Barbie Mattel, the link is below. 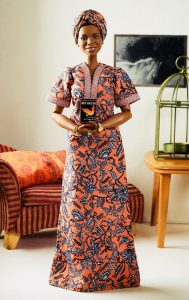 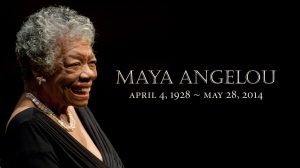