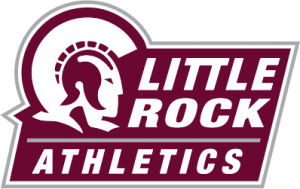 The 2017-18 athletic year is well underway in Little Rock (LR), with five sports; track and field/cross-country, volleyball, soccer, golf, and swimming all competing and making headlines for the University frequently. The Trojan Tracker rounds up all the latest news, results, and upcoming events for each sport.

As of writing, LR TF/XC have competed in two events, the Brooks Memphis Twilight Classic and the UCA XC Challenge.

At the XC Challenge, men’s runner Lalang followed up his impressive start at the Twilight Classic to win the XC Challenge. Araiza and Medina finished eighth and ninth as the Trojans performance helped the team to finish second.

Looking ahead, LR TF/XC compete in the Chile Pepper Festival in Fayetteville this weekend.  The Trojans will host the Little Rock Invitational at Rebsamen Golf Course on Oct. 14.

LR volleyball is off to a slow start this year with a record of 4-10. The season started at the Southern Miss Invitational. LR lost two out of three matches, defeating Jackson State before losing to Miami and Southern Miss. The Trojans  faced a similar outcome at the UCA Invitational, with a victory over UT Martin before losing to UCA and Memphis.

LR finished similarly at their final two invitationals of the year, the Holiday Inn Express SFA Invitational and the Billiken Invitational, having lost to Colgate, Stephen F. Austin, Saint Louis, and DePaul, while beating Texas Southern and Louisiana Tech.

Despite their start, LR still has half the season to turn it around, with seven home matches coming over the next six weeks, as well as two away matches in Louisiana this weekend.

LR soccer has started the season 5-5-1, remaining unbeaten at home. In contrast, the Trojans have yet to win on the road.

The season started with an overtime win versus UCA at the Coleman Sports and Recreation Complex. The Trojans dropped their next two away contests versus Memphis and Texas (televised on the Longhorn Network).

LR rebounded with consecutive home victories, shutting out Missouri State and Sam Houston State. Similarly, the team lost two straight away games and came home to take a win and a draw versus UAPB and Louisiana, respectively.

Despite losing a close 1-0 match in Jonesboro last Friday, LR beat Rio Grande-Valley 4-0 in front of a home crowd Sunday.

Tomorrow night, the Trojans kickoff a two-game weekend homestand versus ULM and Coastal Carolina, with kickoff times of 7:00 p.m. and Sunday at 12:00 p.m.

LR golf has competed in five total tournaments the past month, three for the women’s team and two for the men’s.

The highest finish by a Trojans women’s golfer in the tournaments came in the Sunflower Invitational where senior Sabrina Bonanno tied for fifth.

The men’s team competed at the Memphis Intercollegiate and the Mark Simpson Colorado Invitational, finishing third and eighth, respectively.

The men’s top finisher at the tournaments was junior George Scanlon, who tied for seventh at the Intercollegiate.

The LR swimming and diving team has yet to start their season, with their first meet coming tomorrow at the North Texas Relays. That being said, the team has been making headlines outside of the pool.

LR swimming and diving signed 9-year-old Edyn Grace Walterhouse as an official member of the team on Sept. 20. Edyn, diagnosed with CAPOS syndrome, was signed to the team with the help of Team IMPACT. For more on Edyn and Team IMPACT, read our story here.

For more news on Little Rock Athletics and all the happenings on campus, keep following the Forum. 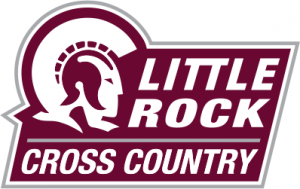 Senior Trojan distance runner Isaac Lalang has saved his best performances for his final season as a member of the Little Rock (LR) cross-country team.

Education and significant competition drew Lalang to LR. The Kenyan has established himself as one of the Sun Belt Conference’s elite runners this season.

Coming off a first-place finish at the UCA Challenge with a time of 14 minutes, 21 seconds, and one-tenth of a second, the senior runner still believes he has more to give.

Being the third of seven siblings, nothing has come easy for Lalang and his family. Determination, concentration, focus, and discipline are just a few words the senior used to describe his preparation before a meet.

His parents are his backbone and live in his hometown of Eldoret, Kenya. Finding ways to keep the family updated and informed about his success and finishes has been very critical, as well as challenging.

Traditional avenues like telephone, pictures, videos, and newspaper articles are just a few of the ways he notifies his family of his success. To keep the senior runner grounded, a day prior to every meet, Lalang contacts his mother and listens as she critiques his running style and gives him motivation to succeed.

Before Little Rock, Lalang ran most recently at Texas Wesleyan University, earning cross-country team MVP honors, as well as the 3D Award for Determination, Desire, and Dedication. At Iowa Central, he helped his team to the NJCAA National Championship while posting a 4.0 grade point average.

Lalang is second in school history in the 1oK race and holds the school record in the cross-country 8K. In the 2016-17 indoor season, he came in third at the ASU Kickoff Klassic with a time of 15:18.91. In the 2017 outdoor season at the Sun Belt Conference Championships, he scored in three different events while placing fourth in the 3K steeplechase in 9:33.45.

When asked what can he do to get better, Lalang replied he needed to “stay focused and continue to workout and push myself, and let all the training in the summer take over.”

When asked what his goal is for the remainder of the season, a confident Lalang replied  “…finish strong and be in Louisville, Ky., Nov. 17th, for the NCAA Cross-Country Championship.”

The Trojans top finisher, freshman Hannah Manning, placed eighth, earning the Trojans eight points with a time of
18 minutes, 17 seconds, and nine-tenths of a second.

Rounding out the women’s side was senior Rebecca Solis and junior Akeia Joyner. Solis gave the Trojans
38 points as she placed 44th with a time of 21:03.2. Joyner finished 55th earning 49 points with a
time of 23:04.7.

On the men’s side, the Trojans finished second overall while Trojan Isaac Lalang won the UCA Cross
Country Challenge.

Ragelia Araiza and Emilio Medina also had top 10 finishes with times of 15:11.7 and 15:11.9 finishing
eighth and ninth place.

The Trojans tallied 55 points overall, 33 points behind the leader.

Trojans Track will return to action Sept. 29 when they travel to UA-Fayetteville for the Chili Pepper Festival.

The event’s winning time belonged to Kigen Chemadi of Middle Tenn. State, who ran a 19:46.26.

As a team, the Trojans completed the event in eighth place.

The five Trojan athletes in the women’s 5k run earned a 12th place finish as a team.