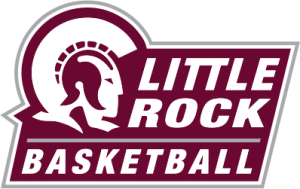 The Trojans men’s basketball team made a late run, but fell short 81-79 to Ouachita Baptist on Homecoming at the Jack Stephens Center Saturday evening.

When asked what the difference in the game was, LR head coach Wes Flanigan responded, “Defensively we couldn’t manage to get that crucial stop or win those 50/50 balls.”

Coach Flanigan said, “We’re a good defensive team with a lot of younger guys out there taking some chances, we’re just gambling a little too much and that’s on us as a staff. We have to do better coaching these guys.”

The Trojans went into the half down seven but managed to cut the deficit to three with 12 seconds left, forcing 10 second half turnovers. When asked what can he take from this game, Flanigan replied “We have to get better defensively but our strength is our bench.”

“I like the fight I saw in these guys in the second half… We’re not where we want to be, but we will get there in the next few weeks, we’re still trying find ourselves offensively,” Flanigan said.

Little Rock heads for a showdown with Memphis at the FedEx Forum Tues., Nov. 14, tipping off at 7:00 p.m.

Little Rock (LR) men’s basketball began its season tonight on Homecoming Weekend. The Trojans hosted Ouachita Baptist University (OBU) in a thrilling game at the Jack Stephens Center. LR’s fan base was in full force for the homecoming game and the Trojans gave them a lot to cheer about. OBU won the contest, but it came down to the last seconds before they pulled out the victory.

It was a close ball game in its entirety. The first half was back and forth with six ties and eight lead changes. OBU took a 40-34 lead into the half. OBU shot 44% in the first half to LR’s 50%. The Tigers senior guard Jontavis Willis was the half’s high scorer with 9.

At half-time, the Homecoming court was honored, and Ms. Courtney Curry was crowned Homecoming Queen. After the ceremony, LR came out of the locker room aggressive.

LR scored five quick points to begin the second half. A lay-up by junior forward Ben Marcus and a three by junior guard Anthony Black cut the lead to one, the closest LR would come to besting the Tigers. Excellent shooting from the field and the three-point line by OBU held off every LR surge. The Tigers shot 73.7% from the field and 66.7% from three in the second half to eventually get the 81-79 victory. OBU’s Willis went 4-8 from beyond the arc and ended as the game’s leading scorer with 18.

Freshman forward Damir Hadzic led the Trojans in scoring with 16. He shot 7-11 in the game and tallied four rebounds. Junior forward Oliver Black led all players in rebounds with nine and LR had four players score in double figures. Junior guard Cameron Reed went 2-3 from the three-point line and finished with 8 points.

This was Little Rock basketball’s 80th season opener. Including today, LR, is an even 40-40 in season openers. Coming up, the Trojans face a three-game road trip against Memphis, Grand Canyon University, and San Diego. They return home on Nov. 25 to begin a three-game home stand. Their first opponent is Robert Morris and the game is slated for 3:00 p.m.

Coming into the game, the talk centered on LR’s new arrivals. The Trojan veterans, however, stole the show, with Andre Jones leading the team at 25 points, while juniors Ben Marcus and Oliver Black were tied for second with 18 points.

For the freshmen, Cameron Corcoran led the team with four assists despite a difficult night shooting. Kris Bankston notched seven rebounds, second only to Oliver Black’s 11.

Little Rock coach Wes Flanigan spoke about the freshmen, including Cameron Corcoran after the game.

“(I thought) Cameron Corcoran gave us a lift late.” Flanigan said. “He was under control, (and) made some big plays for us down the stretch.”

The Trojans shot 19-21 from the free-throw line, with Ben Marcus leading the team at a perfect 8-8.

The moment most remembered, however, came in the fourth quarter. Andre Jones finished off a pass from Cameron Corcoran with a dunk that brought the entire arena to its feet. Jones reflected on the dunk later.

The dunk gave the Trojans the needed boost to finish out the game strong, winning 84-68.

Little Rock’s next game comes Sat., Nov. 11, at 3:00 p.m., when they take on Ouachita Baptist in the annual Homecoming Game.