Little Rock (LR) baseball lost 11-2 to the Arkansas Razorbacks in an exhibition at Gary Hogan Field on Friday.

Despite it only being an exhibition, the game was a historic event for both schools and drew a crowd of 1,349. Arkansas broke with a longstanding tradition to not play fellow in-state schools and further scheduled a competitive game versus the Trojans on April 2 in Fayetteville. For LR, the game was a chance to measure the team’s ability against a top opponent in the Razorbacks, last year’s national runner-up in the College World Series.

Missed opportunities ruled the game for the Trojans. Despite putting runners in scoring position, the Trojans failed to bring the runners in, leaving men on base in multiple innings.

LR pitched a quick top-half of the first inning, allowing one walk on four batters. Despite a two-out double in the bottom of the first from senior Riley Pittman, the Trojans couldn’t capitalize, with the inning ending on a groundout.

Arkansas quickly took advantage of LR’s missed opportunity, notching three runs in the top of the second and another run in the third after an error from the Trojans.

The bottom of the third started promising for LR, with the first two Trojan batters reaching base on a hit-by-pitch and a walk. An infield single brought the bases loaded with no outs, but Arkansas junior pitcher Isaiah Campbell pitched out of the jam, surrendering no runs.

Again, the Razorbacks took advantage of LR’s failure to score in the third, notching another run in the top of the fourth to make the score 5-0.

The Trojans finally recorded a run in the fourth with a solo homer by senior outfielder Troy Alexander, bringing the Trojans within four.

After retiring the Razorbacks in the top of the fifth, LR put a runner in scoring position with two outs. Like previous innings, the Trojans failed to bring the run home.

Arkansas added another run in the sixth to bring the score to 6-1.

LR’s offense responded in the seventh with a leadoff double from senior Christian Reyes. Fellow senior Chase Coker scored Reyes to bring the Trojans back within four with two innings to play.

Arkansas started the eighth inning with three straight hits, bringing home two more runs in the process. Junior McKinley Moore, pitching in relief, gave up a run on a bases-loaded walk, but pitched LR out of danger and avoided the big inning.

In the bottom of the eighth, LR got another runner in scoring position with one out, but two straight strikeouts ended LR’s chance at adding another run to the board.

In the top of the ninth, LR surrendered two more runs, effectively ending LR’s hopes of a comeback at 11-2.

Despite the loss, the game allowed LR coach Chris Curry the opportunity to see his team in action and several members of his pitching staff in tough situations.

Next up, LR will travel to Mississippi to face Ole Miss in another exhibition on Oct. 27.

The Trojans (4-3) dropped the series opener 3-2 to the Mastodons on Friday evening. Inclement weather shortened the scheduled four-game series, as a Saturday doubleheader was postponed and moved to Sunday.

The Trojans got another complete game performance in the next game, as Chandler Fidel fanned six batters and gave up one run in LR’s 7-1 victory.

LR will travel to Stillwater, Okla., for two midweek tilts with Oklahoma State before returning home this weekend for a three-game series against Northwestern State. 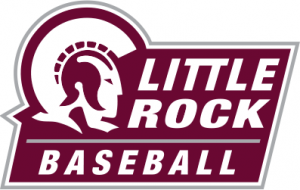 Little Rock (LR) baseball began fall practice Monday, Sept. 25. It’s a new-look squad, having had 13 players from last year’s team graduate and 21 new athletes added. Despite many new faces, the Trojans also have a few faces familiar to LR fans, with twelve returning players. Two of them, pitchers Justin Garcia and Zach Ours, spoke with the Forum about the team and the months ahead.

Question: With so many upperclassmen leaving, do you guys feel more of a responsibility/leadership role?

Justin: “Yeah, I think not necessarily a responsibility, but we need to move into it. We lost a lot of people so someone has to step up and be a leader…. It’s definitely about holding people accountable.”

Zach: “Definitely. Last year, with me being a sophomore, it was hard for me to step into a leadership role with so many older guys…. Especially with a lot of the young pitchers, I can step in and show them what I learned over the last 2 years, so they don’t make the same mistakes I made and get right to it. I think a lot of these guys have talent.”

Question: How does the team look?

Justin: “We’re looking really good so far. We started our first official team practice Monday, and it’s been real competitive and a lot of the guys have stepped up to the moment.”

Zach: “Definitely, the talent is there. It’s a matter of execution and effort…. The execution will come, but the effort is there.”

Question: Personally, in what areas do you guys feel that you need to be better?

Justin: “I think… pitchers and hitters are mostly separated doing practice so just making connections with everyone on the team.”

Zach: “I just want to be a really good leader…. mold into that leadership role as the fall goes on.”

What areas (of improvement) for the team?

Justin: “I think as a team, we need to focus on doing the small things everyday… don’t take a day lightly.”

Question: Do you all do any bonding activities?

Justin: “Coach Curry set us up with a day at the waterpark… a lot of fun! We eat breakfast, lunch, and dinner together… we have a good bond going on!”

Zach: “The good thing is we pretty much live at the same apartment complex, so we’re always seeing each other… Coach makes sure we do a lot of things together.”

Question: Who is the team jokester?

Question: What are your team expectations for the season?

Justin: “Personally I have high expectations, coming off not too good of a season last year. Coach Silva came to me last year and said it’s going be totally different next year…. We have one of the top recruiting classes in the conference.”

Zach: “Absolutely, you always want high expectations, but it’s one thing to say it and another to put a team together… and actually do it. It’ll be a good season.”

Justin: “I’m a senior, so just gain as many memories as I can… create lifelong friendships!”

Zach: “Go out there and help my team at every chance… Go back to the conference tournament… Do more than we’ve done in the past. I know we’ve been good enough in the past…. I know we are now.”

Both: (Shrugging and laughing) “There’s about 6 or 7 players that could go… Two UALR players drafted last year.”

Question: What happens after baseball?

Justin: “I’m hoping to make that dream to play MLB baseball. Hopefully get drafted at the end of this year… If that doesn’t work out, pursue a career in finance.”

Zach: “Same thing, I want to play baseball as long as I can, played it since five (years of age) and loved it since five… It’s awesome to be here as far as I’ve made it… But also, I’m majoring in marketing, so I’m happy with whatever ends up.”