Joyce Crossley believes everyone has a purpose. She says one of them is to make people smile.

Known affectionately by UA Little Rock students as “Ms. Joyce,”  Crossley greets students personably, making sure everyone who visits her on campus knows they are loved.

“I pray for the students,” she said. “I just want everyone to succeed because God made everyone to have a purpose.”

Crossley has worked many different jobs on campus since joining UA Little Rock’s staff team back in 2001 and has been working at the Library Cafe in the Ottenheimer Library since 2016.

“She is just a caring, loving person,” Pace said. “She has a lot of wisdom. Anytime you need advice, just go to her.”

Pace says Crossley has been the mother figure he has needed since losing his own mother.

“She treats me like her son,” he said. “She gives me hugs and tells me she loves me. She is always happy and has an energetic personality. I’ve never seen her mad.”

When asked where she gets her upbeat personality, Crossley pointed to her walk with God. She says God has given her a personality that allows her to spread love to everyone she meets.

“I can’t help the way I am,” Crossley said. “I think He made me this way so I can spread love to other people and let them know that there is a real and true reality in serving a God who invented this whole big world.”

Crossley was born in Jackson City, Louisiana and spent the majority of her childhood in El Dorado, Arkansas. She graduated from Booker T. Washington High School in 1968 and describes her high school experience as “glorious.” Crossley was a high school cheerleader, exposing her to many different sports. Crossley now refers to herself as a “religious” basketball fan. Since coming to UA Little Rock, Crossley enjoys attending Trojan games whenever she can. She knows the players by name and recently supported the team by attending the Trojan Men’s homecoming game.

“The athletic department here on campus is a part of me,” she said. “I just love it.”

Student athlete Anthony Freeman has had many morning interactions with Crossley. Freeman says Crossley gave him words of encouragement before a final exam last semester. He believes her positivity helped him pass the final with an A.

“I think that lady is walking positivity to be honest,” Freeman said. “I hope when I graduate and get into my field that I can be like her and make people feel as welcome as she does.”

Both Pace and Freeman mentioned several other students touched by Crossley’s kindness. Social media responses have also proved Crossley’s warmth has made a lasting impression. Last October, UA Little Rock’s official Facebook page showcased how new renovations are improving the Library Cafe where one student commented “ain’t no amount of lights going to compare to the amount of joy that Ms. Joyce brings!”

Crossley says that one of her hopes is that her love will be remembered long after she is gone. Testimonials given by UA Little Rock students prove Crossley has done more than make students smile, she has given them encouragement and motivation that has enabled them to succeed. 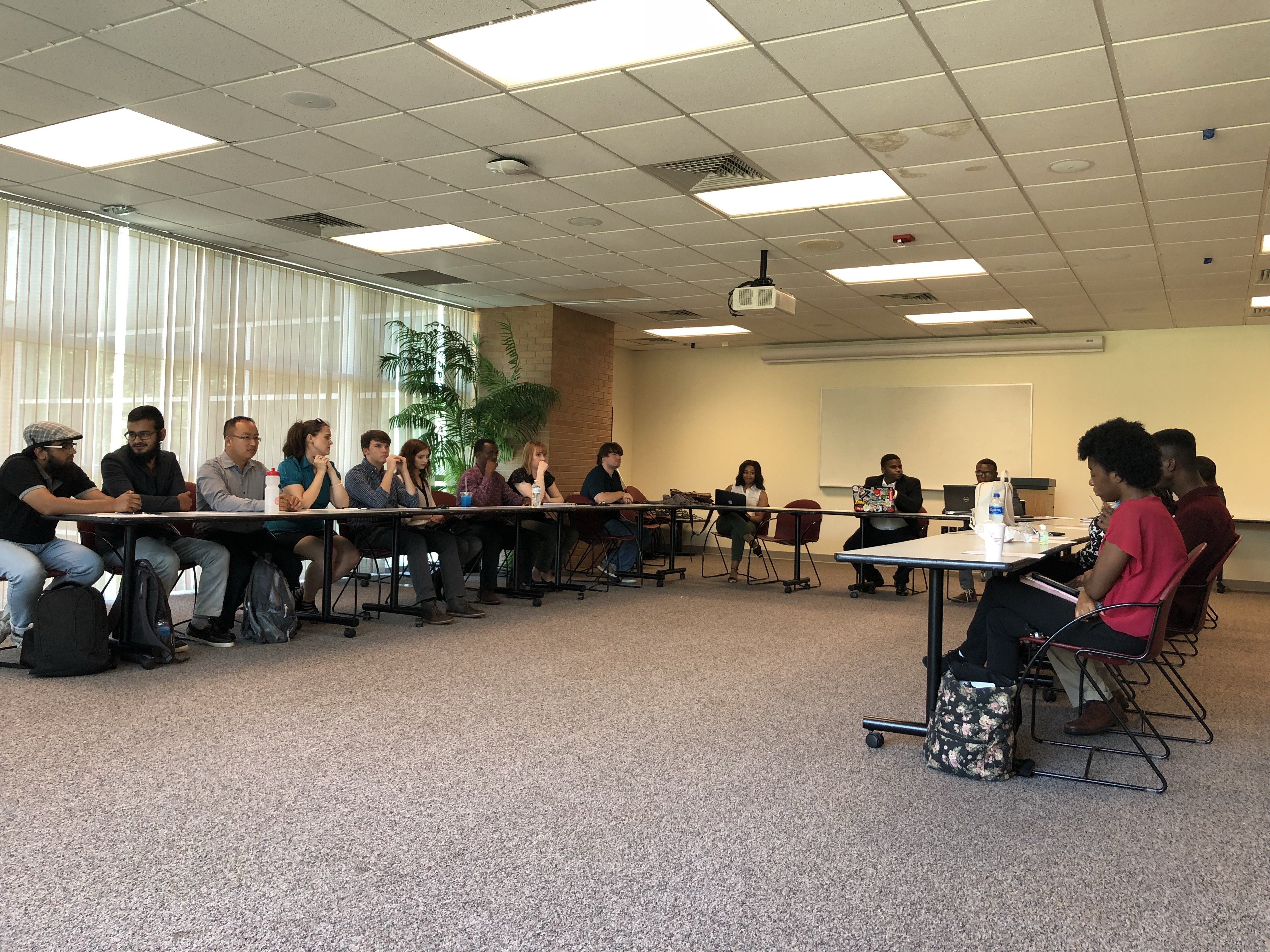 The UA Little Rock Student Government Association (SGA) proposed a request for a “dead hour” to create a time for students to participate in student organizations and social gatherings to The Academic Calendar and Schedules Committee (ACSC) who denied their request.

Other Arkansas four-year colleges have a similar time for their students to engage in campus life, including University of Central Arkansas and Henderson State University. ACSC was tasked by the Faculty Senate to make a recommendation regarding SGA’s proposal. They decided by a narrow vote the proposal was not sound.

The proposal was initially dismissed by the ACSC in a letter addressed to the President of UA Little Rock Faculty Senate Amanda Nolen.

“Regardless of when the dead hour is held,creating a block of time in which NO classes are scheduled will require rescheduling classes and disrupt current scheduling practices, many of which have been in place for several years,” Catherine Crisp, the ACSC Chair, wrote in the letter.

While SGA President Katie Zakrzewski acknowledges some of the ACSC’s concerns are legitimate, she believes the language of the rejection letter signifies an “out-of-touch” attitude. She quoted UA System President Donald Bobbit, explaining universities are in a competitive market.

Zakrzewski says the belief that UA Little Rock is on a different level than other Arkansas colleges might be one reason enrollment has dropped.

The ACSC wrote another reason they voted against the proposal is because the time SGA chose conflicts with two class periods. SGA president Zakrzewski and other SGA members selected the time of 1:30-2:30 p.m. to be the designated dead hour because it is a time when students are normally on campus. The ACSC wrote if the Faculty Senate ignores their recommendation, they request the dead hour take place Tuesdays and Thursdays from 8:00-9:15 a.m. or 3:05-4:20 p.m. because these times do not conflict with two class periods. They also said similar dead times could occur on Fridays if used with “minimal disruption.”

The times chosen by the ACSC are undesirable to Zakrzewski because she said students are not usually on campus during those hours. She said a time during the middle of the day on a day when there are classes would be ideal.

Another reason why the ACSC does not agree with the proposal is because they believe it would require faculty and staff to expend resources.

“A revision of the schedule will require additional faculty and staff resources at a time when resources are limited,” Crisp wrote.

Zakrzewski argues the dead hour implementation would not be taxing on UA Little Rock faculty and staff. She said this time could be used to meet with other faculty members, catch up on work or rest.

In response to the dead hour, 60% of responding chairs from all five of the university’s colleges “thought it was a good idea,” according to data provided by Crisp. SGA members shared a poll on social media to ask students if they thought the dead hour was a good idea. They received a 100% approval rate from over 100 voting UA Little Rock students.

The Faculty Senate did not reject SGA’s proposal despite the ACSC’s rejection letter. Instead, they are creating an ad hoc committee to review the rejection of the proposal and bring back a new and improved plan. As soon as the new ad hoc committee is created to investigate this cause, the Faculty Senate will update SGA and the student body of developments involving the dead hour proposal.

Zakrzewski will address the Faculty Senate to discuss her concerns with the ACSC’s rejection letter. She said the letter embodies language that is detrimental to the university’s advancement.

“You cannot have students coming to you, being active, doing research and genuinely wanting something, getting shot down the moment they bring an idea forward,”  Zakrzewski said.

Zakrzewski realizes these changes will not happen overnight, but she said she hopes the dead hour will be implemented in the next few semesters.

The communication team at UA Little Rock will send a Google form to the entire student body in coming weeks to ask students their opinion about the dead hour. Students will have an opportunity to contact Zakrzewski if they have questions, concerns or comments.

The Student Government Association has partnered with the provost’s office to honor the University of Arkansas-Little Rock faculty for their hard work and dedication.

A new student choice award known as the We Heart Our Faculty Award was designed to give students an opportunity to nominate their favorite faculty member. The results of who voted for who will remain anonymous, but the awards will be presented at the faculty excellence award ceremony April 9. The five faculty members chosen will receive a small glass heart with UALR’s colors in their honor.

This is the first year We Heart Our Faculty Awards will be given out. There was no student-sponsored award for faculty members last year. In 2018, there were awards that recognized a few exceptional faculty members during SGA’s student choice award ceremony. SGA president Katie Zakrzewski created the new award to work in conjunction with the We Heart Our Student Awards. Her hope is to show how much students care about the university’s employees.

“I am hoping to prove that even though morale is very low at the university right now and even though our faculty members are really overworked, we still appreciate everything they do and we still notice when they go out of their way for us. They are always willing to spearhead campaigns that let us know how much we mean to them and we need to return the favor,” Zakrzewski said.

Dean of Students Richard Harper said this award is a recognition opportunity for students to acknowledge faculty who are doing outstanding work on campus.

“At its most basic level, it is to recognize their good work and the excellence they are doing. Whether it is inside the classroom or outside the classroom, whether it is advising student groups or research related, it is the students’ opportunity to pick and choose who they believe is making a meaningful impact,” Harper said.

Harper said he believes the awards could serve as motivation for other faculty to rise up to a better level of work. He said seeing their peers recognized and honored could cause faculty members to improve their own roles.

“I am looking forward to seeing who is going to be named as winners. Hopefully, they can serve as role models for the rest of the faculty,” Harper said.

SGA senator Landon DeKay said discussions with his teachers caused him to realize they do not receive the recognition they deserve. DeKay chose a professor who cares about student input and pushes for students to succeed as his nominee. He said the faculty members at UALR cause students to choose the university.

“Faculty are the reason why the students are here. If you ask any student what their favorite part of going to school here is, it is most likely their teachers. They actually think they’re caring and they want them to succeed. I think that is something our school could use to increase enrollment,” DeKay said.

Five faculty members will be nominated to represent each of UALR’s five colleges: the College of Arts, Letters, and Sciences (CALS), the UALR College of Business, the College of Education and Health Professionals (CEHP), the Donaghey College of Engineering and Information Technology (EIT), and the College of Social Sciences and Communication (CSSC).

Zakrzewski said more than 500 students nominated a faculty member within the first week of voting. The voting for We Heart Our Faculty Awards closed on Feb. 1, but both Zakrzewski and Dean Harper hope this award will become an annual event.

“I think it is a great idea. It is great on both sides. It gives the students an opportunity to recognize faculty members that are doing a good job and also it gets to highlight the campus community,” Harper said.