“The event is part of our reach 13K goal for the school year,” Freshman CLC member Mayra Orozco said. “Admission was ten non-perishable items or five dollars for the food pantry.”

By the end of the year, CLC hopes to collect thirteen thousand items to distribute to those in need in the community.

The event was hosted by Senior CLC member Lucee Lugo and Freshman Turner Hudson. Between each act, they threw T-shirts to the crowd and did raffle giveaways. While anyone could participate, a great deal of the acts were from CLC students.

“We had some incredibly talented people come out to compete,” Rebecca Davis, CLC Graduate Assistant and the person that ran the Battle of the Talents, said “We had a wide variety in our acts; singers, pianists, an ASL interpreted song, dancers, and a slam poet.”

Three judges helped to describe each performance and select the winner. Freshman Mayra Orozco won first place and $100 for her dance to Shawn Mendes’s song “Lost in Japan.” A fan favorite award was given out as well and Jonathan Rollins won it with singing another Shawn Mendes song of “Mercy” winning a $25 gift card.

The Trojan food pantry is always accepting donations and are especially in need of Thanksgiving foods such as corn, green beans and stuffing for the holidays. 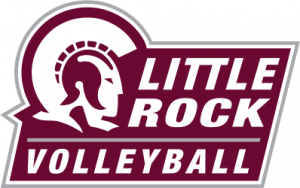 Little Rock (LR) volleyball finished strong in conference play this past weekend, beating both teams they played in Louisiana.

The Trojans finished conference play with a 10-6 record and are 18-11 overall. LR will compete in the Sun Belt Tournament in Atlanta this week.

Although the Trojans outscored Texas State in total points, they lost after a hard-fought fifth set. Diana Giordani was a key player this weekend, finishing with 26 digs on Friday night and 22 on Saturday. Veronica Marin also helped lead the team with eight kills against UTA and 16 points against Texas State.

Saturday night, the final home game of the season, doubled as senior night for LR. Senior team members were recognized for their contributions to the team and program. Senior Sydnee Martin is now second in career digs for the program, while Taylor Lindbergh has the second most career assists.

The Trojans play their final two games of the season this weekend, facing Louisiana-Lafayette on Friday and Louisiana-Monroe on Saturday. The Trojans are currently 16-11 overall and 8-6 in conference.

Students and faculty had the opportunity to take part in many fun activities located within the library.

“We did the bean bag toss, spider rings, and got candy,” said freshman Ruby Trotter, “there was also a costume contest, which looked like fun for those that dressed up.”

The library had many “scare stations,” in which students could participate in Halloween face-painting, mini-golf, darts, a bean bag toss, zombie bowling, and a selfie station.

Prizes were given to the top costumes, and those who dressed up were able to choose a digital background to take a picture in front of. Halloween decorations also added to the spooky atmosphere. The annual event will return to the University next Halloween.

Little Rock (LR) volleyball team suffered their first home loss of the season on Tuesday, falling to rival Arkansas State three sets to zero. The Trojans are now 7-5 in the Sunbelt and 15-10 overall.

Despite the loss, students and fans enjoyed the pep band, tank tops from the Maroon Mob, and a $100 Visa gift card for the most spirited student. Pamela Zuluaga and Taylor Lindbergh stood out with fifteen assists each, and Mya Robinson led with ten kills.

This past weekend, the Trojans split two away games, beating Georgia Southern three sets to one and losing to Georgia State two sets to three. Veronica Marin led with seventeen kills in the Georgia Southern game, while Diana Giordani contributed sixteen digs.