“Malcolm & Marie” is an emotional tirade written and directed by Sam Levinson (writer and director of “Euphoria”) starring John David Washington (“BlacKkKlansman”) as an upcoming film director and Zendaya Coleman (“Euphoria”) as a failed actress. The movie is a secret project filmed in 2020 during the COVID-19 pandemic and it is evident through only 2 onscreen actors and a single film location where they adhered to as many safety measures as possible.

This drama is set in a swanky Hollywood house isolated in the woods at 1 am in the morning after director Malcolm’s movie premiere. In the beginning monologue Malcolm ruminates over how his film is going to be politicized by reviewers because of him being a black man as well as his film actors being people of color. Marie is not entertained by his zeal for the night and is visibly upset while making them mac and cheese for dinner. Thus begins the many arguments that comprise the almost 2 hour long film.

Malcolm initially stands out as a narcissist infatuated with his own triumphs and Marie as the exploited younger partner. Later Malcolm is perceived as the forgiving partner and Marie as the backstabber. Both characters slowly unveil their feelings, fighting to be the one in the right. Marie is deglamorized along the course of the night enhancing the rawness of emotion, the bathtub scene especially garners sympathy for her. The movie is also cheeky in instances where Marie is close to naked and discussion turns to criticism of the male gaze. There are many occurrences of a critique on Hollywood being played out in the scene, which is just a little meta.

The camera shots are inventive and stylized in a grainy black and white. Certain camera angle choices, for example there was not a close up of either of the actors until after the dialogue began, create dramatic effect. They make full use of the outside and inside of the house that makes the film feel less constrained by the single location. The jazzy soundtrack is curated by Labrinth who also worked on “Euphoria” and emphasizes each character’s emotion through the music. My favorite instance of this is Marie playing “Get Rid of Him” by Dionne Warwick after an especially upsetting conversation. Zendaya and Washington’s chemistry is amazing and their acting brilliant as they convey each of their character’s hurt as raw and real. At times there are really sweet moments and in others it almost physically hurts to watch.

One issue I had with the film is with the writer and director Sam Levinson. With one of the film’s characters being a Hollywood director it is hard to tell when Malcolm’s rants are his character’s own or Levinson’s. It was obvious that Levinson was channeling himself through Malcolm which took away from him being a fully formed character. The discussions of black directors and how they are received in the film industry was a little off to me and that may have been because Levinson is a white man whose lived experience will never be the same as the characters.

This is a difficult to watch film and truthfully not satisfying by the end but I was never bored. The movie showcases the ups and downs of a relationship in a single night and there is a lot to relate to for anybody who has been in one. There is no happily ever after and the message to be taken is that love is not perfect or always romantic. The substance of the movie was not perfect but the acting was so incredibly captivating. I would recommend the movie to someone who wants to be immersed in the drama of someone else’s else for a night. Sit down with a bowl of mac and cheese be ready to be emotionally exhausted. 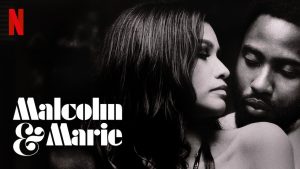