From the moment you press play on “Soul” the unique jazz influence begins and can be heard from the Disney logo before the film.

“Soul” is a children’s movie that targets complex ideas like the purpose of life and how we define ourselves. This intense discussion of philosophy is made palpable to children by focusing on an African-American man’s pursuit of his dreams, during his life and even beyond life.

“Soul,” directed by Pete Docter, was released on Christmas Day in 2020 on the streaming site Disney+. Docter is also known for his work on other Disney movies such as “Inside Out,” “Up,” “Monsters Inc.,” and “WALL-E.”

The movie is a fantasy comedy movie following Joe Gardner (voiced by Jamie Foxx) as he pursues his musical dreams. This movie features computer-animated characters and backgrounds as it shows the audience a day in the life of New York, especially the jazz scene in the city. He meets a soul not ready for Earth yet, named 22 (voiced by Tina Fey). 22 is a cynic and rejects the possibility of having a life, even after several influential historical figures are said to have mentored 22. After an unfortunate sequence of events, Joe must mentor 22 in order to take their Earth pass and return to his body. The duo runs around New York City interacting with a ton of lovable characters that will entertain children and adults alike.

A lot of effort was put into creating diverse characters, especially those in supporting roles. There are also many emotional and heart-warming moments with Joe’s mother, Libba (voiced by Phylicia Rashad).

To sum up the appearance of the film, it was stunning. The computer-animated scenes were detailed and beautiful. All of the characters were designed to stand out. The scenes covering the subway and the streets of the city were bustling and colorful. It really was a beautiful art form.

“Soul” is not the first Disney or Pixar animated film to feature a character of color in the starring role. But, “Soul” does have Pixar’s first African-American protagonist. I decided to watch this movie during Black History Month to celebrate the increasing diversity I was seeing from popular entertainment companies.

While I found that “Soul” was an entertaining comedy, I would agree with a lot of criticism the film received. Joe Gardner is an African-American man, but for most of the movie, he is portrayed as a cyan blob. This is meant to represent an individual’s soul. All souls are this cyan color and change facial characteristics once they live a life on Earth. Comparing this movie to Disney’s “Princess and the Frog,” the issue is very similar. The main character is a person of color, but they take on some other form during the majority of the movie. Tiana and Naveen turned into green frogs, Joe Gardner turned into a cyan blob. This makes me question if media is as progressive as we applaud it for being.

When Joe does get to return to his body, he is in the form of a therapy cat, Mr. Mittens, and 22 has landed inside his body. Even in the return, there is still a separation of the main character and an African-American body.

Despite the comedy and wholesome philosophy provided in the movie, I have an issue with the subliminal message that all souls look alike. They become unique eventually but having Joe be a cyan blob amidst all the other characters does not sit right with me. It provides an idea to children that, yes Disney could be trying to push the idea that we are all the same inside. This could be an attempt to create the idea of true equality on the screen, teaching children that everyone is the same on the inside and should be equal. However, it perpetuates the social issue of being colorblind and the negative impact that can have within our modern racial climate.

While “Soul” should be applauded for its beautiful art style and talented cast and director, along with an action-packed plot and introduction to philosophical thoughts, the movie still falls short on truly bringing well-done diversity to the television screen. 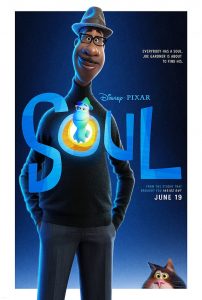