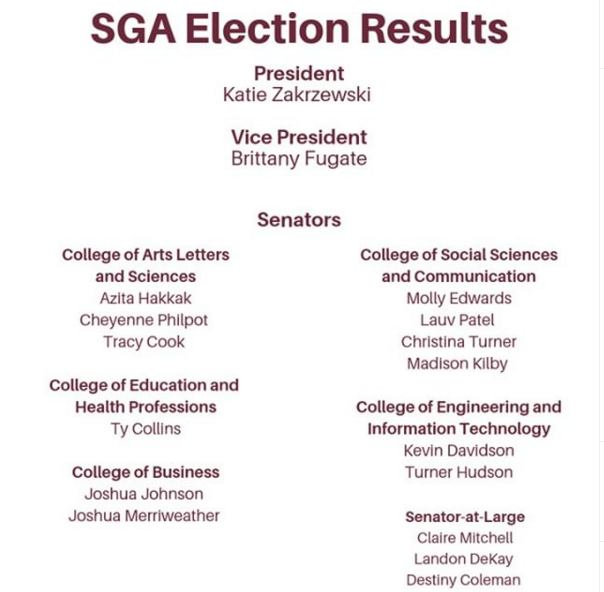 Zakrzewski is from North Little Rock, AR and currently a senior majoring in Criminal Justice and Anthropology. When asked about “what do you plan to have happen while in your position?”, she stated [she] “wants to see a drastic increase in campus life, along with an increase in club involvement. I want to establish a more efficient system of communication here on campus to eliminate many of the frustrations that students experience”. A super fun fact about our president is that she can “spear throw, I can juggle, and I play the ukulele”. Let’s welcome and congratulate Katie on being the 2019-2020 school year president.

Fugate is from Woodlawn, AR and majoring in History. Fugate has Hozier after a concert which a cool fun fact to know. When asked, what do you hope to see happen while in your position, Fugate stated, “I hope to see more student life, and more positive opinions about UA Little Rock across the board’.

Philpot is from Bauxite, AR and a current Biology and Anthropology major. While serving in her position, she wants to “work with our recruitment team and help increase enrollment”. When asked, “what do you hope to see happen, she stated that, “she wants to see more recycle bins in more places and being emptied in a timely manner”.

Cook is a native from Little Rock, AR majoring in Interdisciplinary Studies. As a current Post-Baccalaureate student, Cook reasoning for joining SGA is that “I plan to push the importance of cataloging and publishing student works. I hope to see UA Little Rock gain an identity with the communities inside Little Rock, as community involvement will increase attendance and visitors for events. I joined the SGA to gain my own identity with students in CALS, an introduction of Tracy Cook you could say”.

Mitchell is also a native from Little Rock, AR and currently majoring in Political Science, minor Professional & Technical writing. A fun fact that Mitchell wants you to know about her is that “Brian Gregory was my inspiration for joining SGA. His dedication and passion inspired and motivated me to be more involved”. Mitchell joined SGA because “I will be focused on campus-wide student issues and concerns, specifically spearheading an agenda that promotes transparency and trust within the University’s administration and their student body (through liaisons such as SGA). Students invest all of themselves into this university when they enroll, whether it be for 15 hours or 3. Every student on our campus deserves to feel as involved, supported, cared about, and able to grow in an environment they are proud of. I joined SGA to be a part of the amazing group of student leaders who have really moved mountains lately for the betterment of our University and our educations. It was very obvious to me that I needed to be involved in an organization full of people ready to create and facilitate meaningful change”.

Hudson is from Mayflower Arkansas and majoring in Mechanical Systems Engineering. He is excited to be a taking his major classes and learning more. Hudson joined because “I hope to help develop more of a student life on campus and see more student involvement in activities and all around campus.  I joined SGA because I believe they can be one of the most valuable places on campus if you are looking to make an impact”.

Merriweather is from Memphis, TN and majoring in Business Management. Merriweather decided to be a part of SGA because “hope to see the student body and work together as one to make the University a better place. I joined SGA to be a voice for those who don’t have one”.

Hakkak was born and raised in Little Rock, AR and currently majoring in Interdisciplinary Studies that requires three minors, which are Applied communication, Writing, and Nonprofit. Hakkak joined SGA because, “I would like to improve our campus for people with disability to have better access around the university and making sure it is up to date. I also like to try to bring back trollies for various weather conditions. I also like to make sure our recycling is done properly and try not to substitute many things by recyclable item or items made with recyclable material. I joined SGA, because I want to be part of the solution to make our university a better place for everyone, including people with disability.

Coleman is from Forrest City, Arkansas and a current major in Social Work Minor Health and Exercise Science. Coleman reasoning for joining SGA is to “I plan to represent my University to the best of my ability during my time. I hope to listen to the student body’s complaints, concerns, and opinions and also bring them to the SGA meetings for deliberation. I joined SGA to be more involved at UA Little Rock and to make a difference and changes on campus that others may be unable to do”.

Turner is from North Little Rock, majoring in Mass communications, mass media emphasis. She just started an outreach program with her best friend that serves the community by givingback to the homeless and mentoring middle and high school students and are looking for more members to join them. She joined SGA to be more involved in campus activities and to get other students more active, especially those who aren’t the traditional student.

Johnson is from Little Rock, AR majoring in Business Management. While serving as senator, Johnson “desires to get more students opinions on ideas to make this campus a better place. I joined SGA because I wanted to have a voice on campus and contribute to UALR in a positive way”.