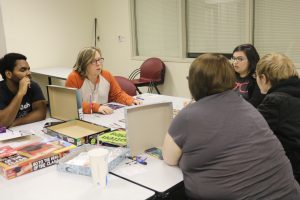 The UA Little Rock’s Lesbian, Gay, Bisexual, Transgender and Questioning and/or Queer+ (LGBTQ+) Alliance is working to bring change to their community.

The group is a campus organization open to LGBTQ+ students and staff, along with their straight allies.

“We provide a safe zone for those who identify in the LGBTQ+ community, whether it’s in gender identity. sexuality or allies who accept them,” Vice President of the Alliance, Brianna Mundorff, who is also a pansexual female herself, said.

The Alliance also strives to educate students on the variety of different types of sexuality, gender identity along with LGBTQ+ history.

“We’ve partnered with Health Services for several things, especially in the sex education aspect,” President of the club Bee Chaney, who identifies as a bisexual female, said. “We have partnered with them with things such as World AIDS Day. We also partner with other organizations on campus, including Counseling Services.”

Chaney has been with the club since 2013 and since then has been trying to get the campus to install more gender-neutral restrooms. Currently, the restrooms of that kind are only found in the Donaghey Student Center (DSC), one in health services and two in the cafeteria. Chaney explains that students who may not feel comfortable using the restrooms that “society” tells them to use shouldn’t have to walk all the way to the DSC just to use the restroom they have the right to use.

“As they were building the new art center on campus, we campaigned for them to include some gender-neutral restrooms along with it, but they just didn’t listen,” Chaney said.

The Alliance is also working on other projects as well to make the campus for friendly to the transgender and genderqueer community.

“We are working to get more inclusive language into the syllabi,” Gunner Retford, Social Activities Coordinator of the Alliance and a gay man himself, said. “We are also working to create a form to change the names of students who no longer identify with the name the records have them listed as to prevent transgender and genderqueer students from getting ‘dead named’ in the system.”

The term “dead name” is similar to the phrase “birth name” in that it’s the name a person is born with but, due to transitioning to a different gender or a similar factor, no longer identifies with that name.

Retford has a story that relates to a majority of members of the organization. Growing up, he attended a very small, conservative high school that had no real options of support for students like Retford. It wasn’t until he came to Little Rock his freshman year and discovered this organization that he truly started to feel accepted.

“Through the Alliance, I met a lot of good people who are very loving and accepting. I have found my place, my friends and my people. I am now able to help others who feel lost, like I did at one point,” Retford said.

Throughout the school year, The Alliance puts on events such as National Coming Out Day, which is celebrated every year on October 11th. For this event, the members of the Alliance build a portable “rainbow closet” with information about LGBTQ+ history, people, and important causes people outside of the community may not be aware of inside. They also do things for World AIDS Day, to promote testing and awareness for the deadly disease that affects a lot of the LGBTQ+ community, along with several bake sales. The money raised for these events allows some of the members to attend a conference called Creating Change.

Creating Change is a conference held every January sponsored and organized by the The National LGBTQ+ Task Force. There, students can go and learn how to change the language used against LGBTQ+ students on campus and positively affect their campus and community. They also have the opportunity to network with LGBTQ+ friendly companies to help get future jobs after they graduate.

“This year, Creating Change was held in Washington, D.C. and we raised enough money to send four of our members,” Chaney said, who was one of the four members, along with Mundorff, to attend. “This year, we tried to make it a point to go to different sessions and we were able to bring back a lot of different things to help the Alliance bring change to campus.”

Despite hate speech still active around campus towards the community, including hateful writings on posters and bathrooms across the campus, the Alliance continues to stay strong due to being such a close-knit family.

“If for whatever reason you have reservations to join, this is a Safe Space. Whatever you say will stay in this room, it will not go anywhere else. We are available to talk whenever you need us,” Retford said.

“If you support the LGBTQ community in any way, shape or form, you are welcomed,” Mundorff said.