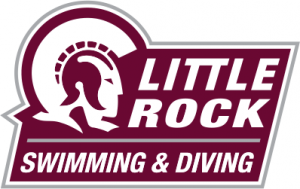 The Trojans lost 150 to 91 against Vanderbilt on a day that honored LR’s eight seniors that will be leaving the team at the end of this season, Emma Doll, Anela Everett, Tori Fryar, Nuria Gallego-Murcia, Courtney Goff, Samantha Gray, Darby Harmon, and Casandra Sanchez.

The meet also held a different format compared to most meets with the addition of the “sprint shootout.” A sprint shootout is where swimmers race in a 50-yard event of any stroke with three different rounds. In the first round, the top two finishers from each school move on to round two, where the top finisher from each school of that round moves on to the final round where they race head-to-head for first place.

In the first round of the 50-freestyle, LR’s Tori Fryar and Emma Doll, alongside Vanderbilt’s Madeline Hunt and Brenda Cha, claimed the top four spots, with Fryar and Doll tied for a time of 25.38. In round two, Fryar and Hunt came out on top to battle it out in the final round, where Hunt ultimately took the victory, but Fryar still finished the race with a personal best time of 25.05.

In the 50-backstroke shootout, LR’s Laura Ruis Astorga and Charis Won, as well as Vanderbilt’s Johanna Golblatt and Madison Eaker, finished top in the first round. Then, Astoria and Goldblatt raced it out for the gold, where Vanderbilt took the victory.

In the 50-fly shootout, LR’s Isabella Finzen and Cassandra Sanchez, along with Vanderbilt’s Breanna Sapienza and Lauren Bergmann placed in the top-two for their teams respectively. Finzen and Sapienza came in the top-two during the second round where Sapienza won in the final round.

In round one of the 50-breast shootout, LR’s Palmer Ristroph and Virginia Bryant, as well as Vanderbilt’s Hannah Hunt and Lindsey Gordon finished in the top-four, with Ristroph and Bryant both achieved personal bests with times of 31.14 and 31.86 respectively. In round two, placements didn’t change at all, sending Ristroph and Hunt to the final round, where Hunt just barely out-touched Ristroph by two-hundredths of a second, helping Vanderbilt claim all four wins in the shootouts.

LR’s Samantha Gray also had a great meet this weekend with her the only diver at the meet, having a score of 285.29 in the one-meter dive and a score of 277.04 in the three-meter dive.

LR competes in their penultimate meet of the season in the 2018 Missouri Valley Conference Championships in Iowa City, Iowa at the University of Iowa CRWC Natatorium starting Feb. 14 through Feb. 17.